Please use these links to access our site. These and further links for other general categories and an expanded list is also in the blue navigation panel on the left hand side. 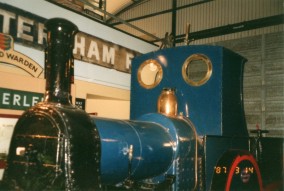 Gazelle was originally built about 1892 for William Burkitt of East Anglia a wealthy landowner, entrepreneur and industrialist. It is believed he used it for travel between his estates in East Anglia. After the owner's death, Colonel Stephens purchased it in 1911 for the S&MR which at the time was being rebuilt. At first it was used as an inspection locomotive and in 1912 was used on the Kennerley to Criggion branch where traffic was light and there were weight restrictions over the Severn River. Initially the locomotive was a 2-2-2WT with an open back and after complaints from passengers a rear cabin was added. A few years later it was rebuilt as an 0-4-2WT and a lightweight ex London horse tram car, with stairs and top seats removed, was used as a trailer. This continued to circa 1930 when Gazelle was withdrawn and the passenger service gradually cut back. In 1936 Gazelle was rebuilt and the Wolseley body used to replace the now derelict tramcar body from whence it was used till the MOD took over the line for special passenger workings. After closure of the S&MR in 1950 by the MOD, Gazelle was displayed at the Longmoor Military Railway until that closed in 1970 when the locomotive was return to the National Railway Museum. Today it is on loan from the NRM and displayed at the Colonel Stephens Museum in Ternterden, Sussex. The Steam And Things frets for Gazelle are for the later 0-4-2WT rebuild with rear passenger cab. We also offer frets for the LCC Tramcar body (details this page). The Wolseley body is also available from us; click this link; as an off-shoot of the Selsey Tramways Woleseley-Siddeley Railcar.

These Steam And Things etched brass frets are produced as an indepth aid to scratch building. Many parts are included and the product is at the material level of a kit though we only supply a (very comprehensive) list of parts. The only difference form a complete kit is that construction detail is left to the modeller. ALSO castings are NOT supplied (in any scale) the modeller will also have to decide on and source wheels, bushes, screws, glazing material, motor, gearbox etc. The modeller will also need to decide on his own method of motorisation.

But from the "etched parts" point of view the kit is as complete as possible per our usual specification and includes S&MR transfers. We will produce special transfers for the freelance railway builder, or for those with modeller's licence!

We offer Gazelle with additional options of the LCC tramcar trailer or the Woseley Siddeley trailer.

For the LCC Tramcar body, we include the following 12 parts on the fret(s):
Sides and body ends, end doors, floor, roof, four types of edging profiles and trims,chassis / W-irons (in nickel silver) with brasss detailing, passenger steps, coupling hooks and coupler pocket. 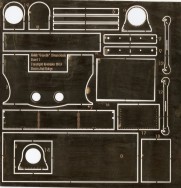 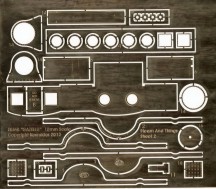 If your scale is not shown, we will gladly produce for you; above scales only reflect past business

Please use these links to access our site. These and further links for other general categories and an expanded list is also in the blue navigation panel on the left hand side.